This week’s theme? Spring cleaning…. out my freezer.

I’ll admit it. Some days, my freezer can feel like a high stakes game of Jenga. I really want that frozen pizza at the back… but is it worth disrupting the weird balance of frozen items…potentially costing myself a toe when a pack of frozen chicken comes flying out by accident!? (Yes)

From frozen veggies, to pre-made items and frozen meats that were on special — it’s chock full of awesome stuff… buuuut sometimes I forget it’s all there! This week, I decided it was time to put all my freezer items to work … just in time for me to fill it with new ones.

One thing that had spent way too long shoved in the back of the freezer was a package of Mahi Mahi Burgers from Trader Joe’s. And, yeah, they would have been really good, just grilled up according to the package directions and slapped on a bun with some arugula and avocado…. but I had bigger plans for those humble little hockey pucks.

And, to use up the broccoli slaw that was probably teetering on the brink of it’s acceptable shelf life… I whipped up a lime, vinegar and honey slaw to go with it! Easy, peasy! I swear!

Now, I hadn’t put together a blackening seasoning before soooo… Google to the rescue. I found a relatively simple mixture on That Oven Feelin that contained spices that I already had in my cupboard…and it was used on mahi mahi — so I figured, win, win!

I took the four mahi burgers out of the freezer for maybe 10-20 minutes before frying up (pictures!! haha) — they were still frozen when I cooked them (as instructions indicate). I sprayed a pan with non-stick spray and sprinkled both sides with blackening seasoning and a little salt. I went a little light on the blackening seasoning this time around because I was cooking for someone who is not a huge spice fan, but I’d probably be a bit more generous with it next time.

Follow the package instructions to cook the fish through; I turned up my heat once they were totally done to get a bit more color of the burgers.

Once done, break up the burgers into chunks and evenly split between four tortillas.

In a bowl, zest and juice one lime. Add vinegar, honey, salt and pepper (to taste). Whisk. Add slaw, onion and parsley. Mix together and let sit for 20-30 minutes (or longer in the fridge!).

Top tacos with broccoli slaw and any other toppings you might want (may affect points).

I will definitely be making these again — and probably spice up my toppings a bit more (I was limited to what we had in the house yesterday). Hope these spice up your Taco Tuesday… or any day of the week for that matter! 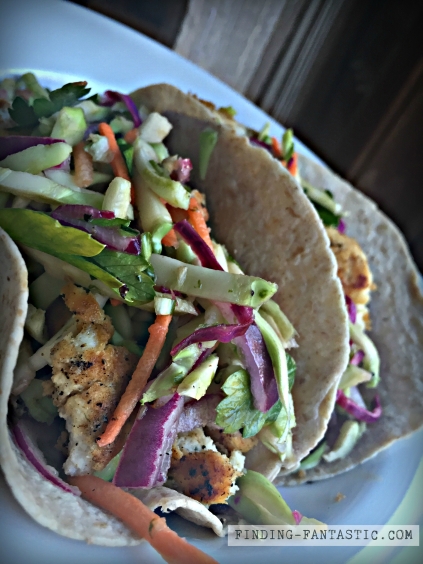