You know, before this weekend – Nemo was an adorably rebellious clown fish who found himself in quite the predicament at 42 Wallaby Way, Sydney. Okay, so he still is…but now Nemo is also a crazy ass snow storm that dumped 28 inches of snow on us in less than 24 hours.

Boston came to a stand still…hell, Massachusetts came to a standstill. Cars were banned from the roads starting at 4pm (people complained but I think it was a smart decision), and driving wasn’t allowed until 4pm the next day. The MBTA haulted for 3 days so there was absolutely no public transportation…sooo what did I do to keep the cabin fever at bay? Well – if you follow me on Instagram (which you should if you don’t!), you’ll know…I baked. And ate. And baked. And ate. Oh…and drank some wine.

However, between all the carbohydrates and alcohol – I did consume some vegetables. I swear. Balance. Haha

Ones of those veggies? Rainbow chard.  I’d never had or made it before…but when I saw those colors pop out at me at the grocery store I had to get it. Prettty! It was a buy now, figure out what to do with it later situation. 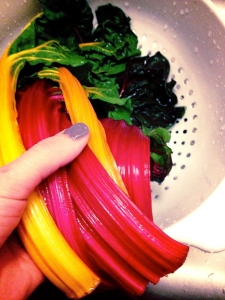 I did some Googling, and decided to keep it simple. Extra virgin olive oil, 2 large shallots, 2-3 cloves of garlic, salt, pepper…and I think some Onion & Herb Mrs. Dash and red pepper flakes…and steamed/sautéed until it looked good.

And ya know what, it was awesome. I have another bunch in my fridge right now just waiting for the same treatment.

Now, as I sit here watching the news…we’re in for another 1-3 inches Thursday. Pshh…a dusting….a dusting.